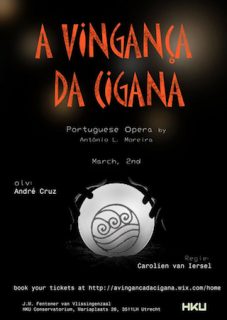 “A Vingança da Cigana” – The Revenge of the Gipsy, an Opera from the XVIII century, is a mark of its own time as it brings us a light comedy about eight characters at stage, at the downtown by the riverside at Lisbon. From Pepa, the Gipsy that makes her living by reading the fortune to skeptics, Mr Pierre the italian-french hairdresser of refined manners, to Camila a colourful rich widow that calls for Pepa to hear exactly what she wants to, leading to the marriage she always wanted to, this Opera will immerse everyone into the daily life of the eight characters and their relationships of life, classes, professions and origins.